A score of performative gestures, drawn from the conceptual art and body art scenes from Central and Eastern Europe in the 1970s and 1980s.

A score of performative gestures, drawn from the conceptual art and body art scenes from Central and Eastern Europe in the 1970s and 1980s.
Collective Exhibition for a Single Body is a project initiated by French curator Pierre Bal-Blanc in the context of documenta 14 in Athens. The present book summarizes his research on how body, language and value intersect. Bal Blanc extract gestures and body situations mostly from conceptual artworks created in Eastern Europe in the 1970s and 80s. These gestures, aiming at being interpreted and repeated, are assembled in a score to be performed, pushing the boundaries between visual arts and choreography. The book documents how the score was performed in several public spaces, from the low-cost supermarket that has replaced the Generali Foundation in its location in Vienna, to a social service office in Leuven, Belgium (as part of the “Playground” festival). Collective Exhibition for a Single Body is also a template for a licence that could frame how to value a score, a gesture, and its embodiment. 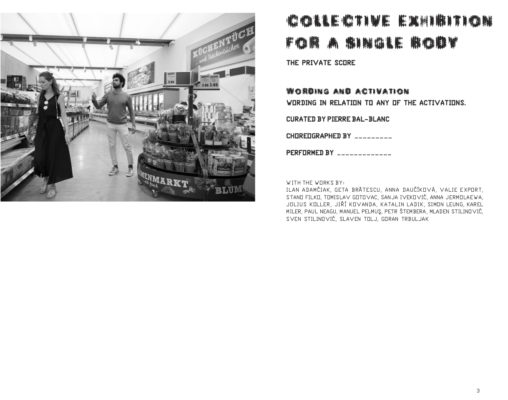 On the Soft Edge of Space – Marleen Sleeuwits

Artist Marleen Sleeuwits, known for her photography, objects and installations, takes this experimental book to propose a four-tiered representation of space: starting with two-dimensional images of space, that are then placed in a scale model, to the photos taken inside this model and, finally, to their convergence in this book. The spaces could be anything [...]

The interdisciplinary and experimental educational ideas espoused by Black Mountain College (BMC), founded in North Carolina in 1933, made it one of the most innovative schools in the first half of the twentieth century. Visual arts, economics, physics, dance, architecture, and music were all taught here on an equal footing, and teachers and students lived [...]

These are Situationist Times! – An Inventory of Reproductions, Deformations, Modifications, Derivations, and Transformations

the Ghost of Weaving – Coll.

The textures of our culture are reflected within the patterns we produce. Sometimes the surface that hosts the pattern is more slippery than imagined, or the pattern appears to have been too unstable in the first place. As the ruler is held exclusively in the hands of humankind, why then is the pattern so tempting [...]