Work 1961-73 is an indispensable publication for anyone interested in the artist and the radical developments in dance and performance in the 1960s.

Originally published in 1974 by the Nova Scotia College of Art and Design, Yvonne Rainer’s Work 1961-73 documents the artist’s landmark early works at the intersection of dance, performance, and art. The publication provides multifaceted insight into some of the artist’s most celebrated choreographic works, including Terrain (1962), Trio A (1966), Continuous Project-Altered Daily (1970), War (1970), Street Action (1970), and This is the story of a woman who … (1973), among many others. 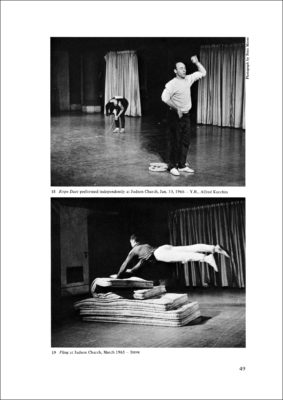 Assembled ostensibly as a survey, Work 1961-73 features a multitude of documentary forms, including scripts, excerpts from the artist’s notebooks, press reviews, correspondence, photographic documentation, literary excerpts, contextualizing texts by the artist, diagrams, film stills, floor plans, scores, and more. As such, the publication resembles an artist book that generously gives the reader access to Rainer’s modes of working, as well as the social and political context around which the work was made. The publication is also a book of writing, with the artist’s frank, witty, and sometimes humorous prose intimately leading the reader through each work.

As the artist states in the book’s introduction:

I have a longstanding infatuation with language, a not-easily assailed conviction that it, above all else, offers a key to clarity. Not that it can replace experience, but rather holds a mirror to our experience, give us distance when we need it. So here I am, in a sense, trying to ‘replace’ my performances with a book, greedily pushing language to clarify what already was clear in other terms. But, alas, gone. This has seemed one good reason to compile a book ‘out of’ the remains of my performances, letting the language fall where it may. Let it be said simply “She usually makes performances and has also made a book.”

Work 1961-73 is an indispensable publication for anyone interested in the artist and the radical developments in dance and performance in the 1960s.

Yvonne Rainer (b. 1934) is a dancer, choreographer, writer,and filmmaker. She is a co-founding member of the Judson Dance Theater and worked primarily as a dancer and choreographer from the early 1960s through the early 1970s. Her choreographic work is widely recognized for blurring the lines between performers and non-performers, incorporating gestural and pedestrian movements, as well as classical dance steps and theatre. In 1972, Rainer began making films, producing seven experimental features, including Lives of Performers (1972), Privilege (1990), and MURDER and murder (1996). She returned to dance in 2000, producing new works commissioned by the Baryshnikov Dance Foundation, the Performa Biennial, and The Museum of Modern Art. She is the author of several books including Feelings Are Facts: A Life (2006), A Woman Who…: Essays, Interviews, Scripts (1999), and Poems (2012). She is the recipient of a MacArthur Fellowship, two Guggenheim Awards, The Foundation for Contemporary Art’s Merce Cunningham Award, and a USA Grant.