Ask the Dust makes one step closer to the minute, counts the speck of dust that the oblivion has not taken, explores the thin fissures where the ephemeral trace of a past life has found refuge. 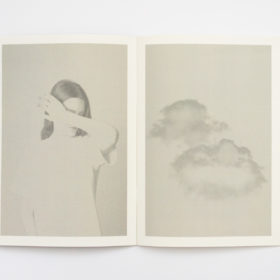 Ask the Dust makes one step closer to the minute, counts the speck of dust that the oblivion has not taken, explores the thin fissures where the ephemeral trace of a past life has found refuge. Following the example of John Adams in his opera I was looking at the ceiling and then I saw the sky, this act recounts a storm, a fictional catastrophe symbolizing the emotional shock of the protagonists. The storm, considered to a love story, turns upside down their worlds, crumble the reality and redefines a new way of life. The journey is following the struggle against the devastation and the transformation of the inner life. Alone in his room, the Man resides between a state of arousal and dream. He stares at the ceiling, the roof is collapsing under the weight of the lightning bolt, he’s facing the sky. This catastrophe from which we will only keep the signification without evoking any reason or content, is at the core of my approach by extending it to the use of the medium. The dust related to the analog practice represents what is infinitely large as well as the others alterations, who become a full-fledged subject. Through this « ballad between the infinitely large and the infinitely small » (Sophie Ristelhueber) I am writing the resurgence of an impression, the rise of a memory generated by the encounter of familiar places, the remembrance through an object and the spirituality that a landscape reveals in us. We are entering in an other space, where the body is absent, a space that doesn’t know his own limit and disappear in fragments of memories which are recomposing. Leave it to the wind to decide what traces are left behind in the dust.

444 is the name of an ongoing project, which includes the Celestial Means of Locomotion, a collection of a selection of works

His photographic research, set along the 430 km that stretch from the Mediterranean sea to the Atlantic Ocean