Indulge in the finest selection of gourmet comics delicacies from all over the contemporary independent comics scene.

A special treat in the 78th issue of Stripburger is an extensive interview with Rikke Villadsen, at the moment one of the most intriguing Danish comics artists whose work is full of evocative symbolism and pure poetic intoxication, a beautifully haunting mix of realism, dreams and of the absurd that explores the complexity of being feminist and human.

What’s more, the issue features an eclectic blend of comics flavours, drawing styles and narrative approaches by the Israeli collective Humdrum, peppered up with the short presentation of the local comics scene by one of the members Dan Allon.

And that’s not all – don’t miss a range of refreshing new discoveries by up-and-coming talents from exotic comics destinations such as Slovenia, Croatia and Latvia. The delicious cover of this issue was created and spiced up with a pinch of humour by Agate Lielpetere.

Make it extra tasty: in our Compendium supplement, you can also find a bunch of fresh comics reviews that will perfectly complement your gourmet comics meal. 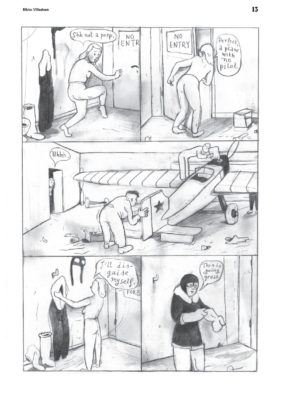