I Am Not I – Boris Mikhailov

I Am Not I brings together 33 tritone images from Boris Mikhailov’s iconic series of self portraits made as the Soviet Union collapsed.

I Am Not I brings together 33 tritone images from Boris Mikhailov’s iconic series of self portraits made as the Soviet Union collapsed.

“In describing the genesis of I Am Not I in the political context of the aftermath of the collapse of the Soviet state, Mikhailov has suggested that he was performing a kind of anti-heroic riposte to the muscular confidence of Soviet-era monumental iconography.

I Am Not I, a thoroughly unacceptable series of propositions on masculinity, libido and the egoideal, is not only an artist’s performance for the camera, but a deliberately self-cancelling account of the impossible contradictions of authorship and identity.”
Extract from text by Simon Baker 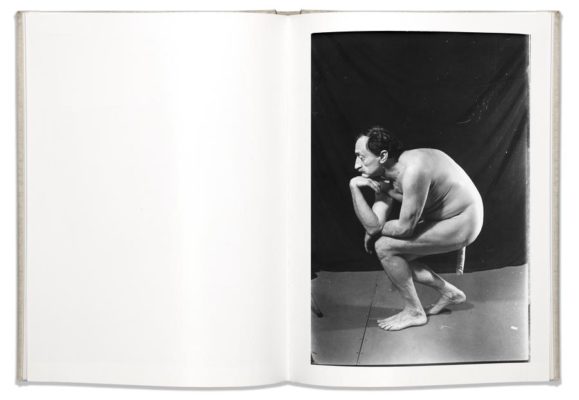 I AM NOT I is an iconic series of self-portraits made by Boris Mikhailov in the early 1990s right after the collapse of the Soviet Union. Acting for the camera, the artist plays the role of an antiheroic figure contrasting with the strong and masculine stereotype previously connected with the regime, whose echo reverberates through he pure and sober black and white adopted for every imagers. Mikhailov, who always investigated the boundaries of photography and its connections with other disciplines, here combines it with the atmosphere and the grammar of theatre. The viewers attend a performance that is reminiscent of the tradition of the Theatre of the Absurd, with the protagonist alone, naked, and handling a sex toy in every possible way. Although his irrational behaviour might at first glance appear like an act of celebration and relief at the end of a a grim era, through repetition it soon turns into an allegory of fear for an uncertain future – it seems like a performance for itself and the camera. The photographic frame is the prison of the performer who, unlike the photographer, cannot look beyond the dark cloth behind him.
Boris Mikhailov(B. 1938 in Charow, Ukraine) is one of the most important chroniclers of the everyday life of a (post-) Soviet society. Mikhailov studied electrical engineering at Charkov University of Technology and initially worked as an engineer, before starting to take photographs as a self-taught artist in the late 1960s. The early series of the 1960s and 70s often show personal pictures of friends, acquaintances or partners of the artist. The world in his pictures is always unadorned and rough – everyday scenes, poverty, sexuality, despair, resignation, decay of a forgetting Eastern Europe. Mikhailov is always dedicated to the outcasts of society. His works have been presented in numerous solo and group exhibitions worldwide, most recently in the Sprengel Museum, Hannover (2013), in the Berlinische Galerie, Berlin (2012), in the Museum of Modern Art, New York (2011), the Tate Modern, London (2010), the Kunsthalle Wien (2010) and the Ukrainian Pavilion at the Venice Biennale (2007). Boris Mikhailov lives and works in Kharkov and in Berlin.

‘Miss Cox (Nude – Arising from the Ground)’ is a many-sided artistic translation of artist Mariken Wessels’ fascination for an anonymous woman who had posed for Eadweard Muybridge’s camera in 1885.

"It was april and cherry blossom time was just over"

akaBB – tribute to Roni Horn is not a photographic diary, and neither is it a simple hommage to Roni Horn’s book.