Cast of Characters
A selection of
100 faces by artist
Sam Porritt.

Collected here are 100 faces by the artist Sam Porritt, drawn between the years 2005 and 2008. These drawings, selected from over 300, have all been made using the same materials; china ink applied with a brush to sheets of A3 paper. The immediacy of working with brush and ink and the range of possibility inherent in the blank page allowed the artist space to follow the direction his initial marks dictated. Through the undulating line of the brush and the tapering off of the ink we read speed and tone, the arch of an eyebrow or the crease of a cheek, and inevitably temperament and expression. 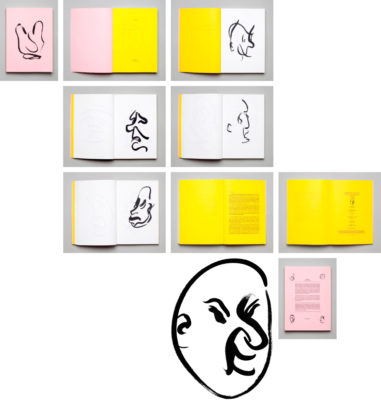 Looking at page after page our eye adjusts to the language of marks. Some are drawn with a certain economy; a decisive line while others are over-wrought, unsettled and barely resemble a face at all. It is striking how quickly the lines become animate, how little time it takes us to recognise a face, assess its character and its mood.
Porritt has said that his only guiding principles were that he make the first mark when his mind was as blank as the piece of paper before him, and that each face should be different to what had gone before. The cumulative effect of his search for unexpected expressions and characters is this drawn assembly: an invoked cast or an audience of self-portraits? Perhaps each is a fleeting facet of himself that looks on as it joins the ranks of those that have come before.
200 pages

Pictures by a robot vacuum cleaner

You can surf later – Ivan Liechti

A collection of engraved trench Art. GI Zippo lighters from the Vietnam War era. The hieroglyphs of the confused

uses additionally a cut on some pages, modifying the shape of patterns and disturbing the first vision.

uses more specifically a work on color, interaction between warm and cold ones, from the enlargement of a photograph.

In the book “Le vieux père”, Laurent Kropf presents a selection of reproductions from his archive of group photographs.