This twelth and last issue of ARTZINES is
the printed version an online archive made
by Amsterdam-based graphic design studio
Experimental Jetset (consisting of Marieke Stolk,
Erwin Brinkers and Danny van den Dungen) on the
subject of the Provo movement (and its post-Provo
offshoots). Within this research, the main subject is
the relationship between Provo, the city, and the
printing press. 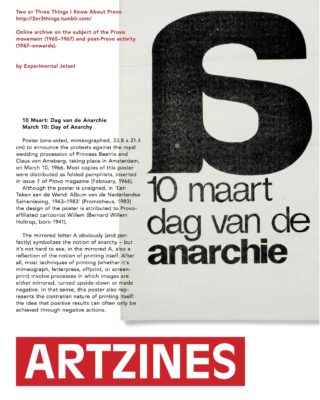 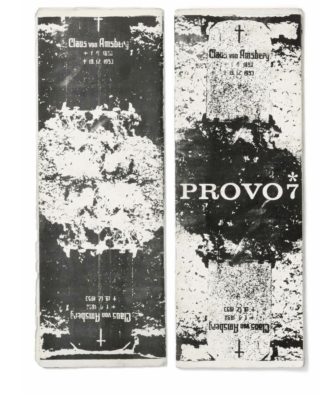 The publications of the Provo movement that
are featured here are not zines (even if they were
self-published), and they are not made by artists
or to be works of art. So why is the last issue of
ARTZINES about them? The publications featured
here are revolutionary, and can be considered
as proto-zines in the sense that they were zines
before zines, or publications that have all the caracteristics
of zines, but are not necessarily considered
as such by the people who made them.
They also have a very strong anarchist agenda,
that places them as one of the main inspiration
of the punk zines DIY ethos. And of course,
what makes them relevant in the context of the
ARTZINES series is the design practice of the
people who created the online archive, the designers
of Experimental Jetset who kindly accepted to
see thir blog printed as a zine and to answer a few
questions.

The book covers a wide range of feminist thinking and works, and the relationship to the visual arts.

Published in 1973, The New Woman’s Survival Catalog is a seminal survey of Second Wave feminist efforts

These are Situationist Times! – An Inventory of Reproductions, Deformations, Modifications, Derivations, and Transformations

Diagram of Historical Development of Fluxus and …. – George Maciunas

George Maciunas’ Diagram of Historical Development of Fluxus and Other 4 Dimentional, Aural, Optic, Olfactory, Epithelial and Tactile Art Forms, was released in 1979 in the Swedish magazine Kalejdoskop